This June workshop happened to also be on my birthday, how cool was that?  However lots of crafting to be done before indulging in a slice of chocolate cake!

Everyone started with a black acrylic prepainted square MDF frame (oh dear I seem to be as stuck on black paint as I am on adhesive backed metal tape),  well I love them both as a starting point for so many techniques.  ﻿﻿﻿


When preparing the sample board, I used a embossing folder with just numbers on and by chance the section I used happened to incorporate my birthdate, how spooky is that? (6-6-48) 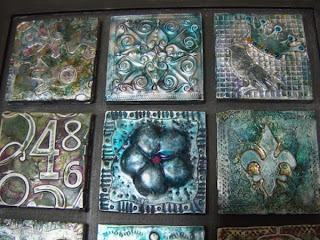 Back to details... nine 2” square foamcore tiles provided along with metal tape! Plus Art Emboss metal.

Six of the tiles were covered with the ArtEmboss metal,  three of which were embossed using an embossing folder.  Three were stamped with an image using Stazon and hand embossed.  If deeply embossed, then filler applied to the back to hold the shape and allowed to dry before attaching to the foamcore.

For the remaining three tiles,  a variety of small die cuts were provide, some of these were glued to the foamcore, the metal adhesive tape applied over.  A paper stump used to smooth the tape around the die cut, a stylus to add definition and other doodling.  Metal roller tools also used to create texture.  Alcohol inks pounced on the metal tiles.  Sanding blocks used to lightly sand the raised areas to show the metal colour.


All nine tiles were then glued to the frame. RubnBuff added lightly around the frame.


Lastly die cut flowers (metal tape over thin black card) were decorated using a fabulous technique you can find as a tutorial on Lin Browns blog here (scroll down on right hand side) and added as an embellishment to the frame. 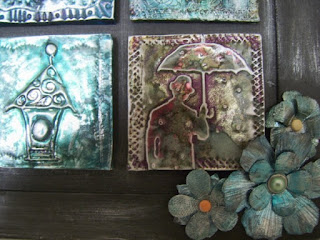 Here is a photo of us all on this splendid day, taken by Theo, Tanya's son.


Most people had left before I realised I had not had a chance to take photographs of their work, but I managed to catch Liz before she left.  Here is her frame and it looks great with the added butterfly.

That is about it for now, will be back to tell you all about the July workshop.  Until then...
Posted by Sheelagh Tomsett at 00:13

Sheelagh Tomsett
United Kingdom
Welcome to my blog, I have been crafting for many years. At present enjoying mixed media projects. Excited and proud to be a Design Team member of Cardmaking Paradise.